At any given time, Raise a Dream is engaged with a variety of projects and collaborations. Follow our featured projects to learn how we engage sponsors, partners, and champions and how we use collaboration to help raise dreams. 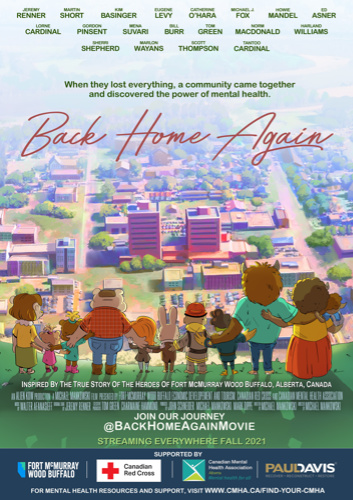 Charmaine Hammond (Raise a Dream Co-Founder) is an Executive Producer of Back Home Again (with Screenwriting and Directing by Michael Mankowski).

Inspired by community resiliency after one of the largest wildfire evacuations in Canadian history impacted the lives of more than 80,000 residents of Fort McMurray and area in 2016, the animated short film titled, Back Home Again, has been brought to life through the support of the Canadian Red Cross, The Canadian Mental Health Association, Fort McMurray Wood Buffalo Economic Development & Tourism, and Paul Davis Restoration Inc.

Watch the trailer below:

To help prepare our youth for the coming era of innovation we need to think differently about education and learning. Instead of testing and measuring knowledge, we need to develop the skills and character traits that matter more tomorrow - creativity, collaboration, and critical thinking.

That’s the goal of Rethink Thinking Foundation – to be an incubator for creativity and innovation. To create resilience and bravery needed in youth that allows them to continuously rethink thinking.

There has been much talk in the education sector recently about the need to modernize the way schools structure teaching and learning. Many schools have already begun the process of rethinking their approach. Some schools are further along in this path than others, but it is clear that we are on the cusp of great change. However, transforming the education system will take time.

Launched in 2016, Rethink Thinking is made up of leaders (including Raise a Dream co-founder, Rebecca Kirstein) who are ready to take action now, who are passionate about supporting young people to fulfill their dreams, and who are skilled in the development and implementation of approaches which engage young people as active participants in their own learning.

How you can help: